As scheduled, the meeting of apex level JAC was held on 29th April 2012 at Kolkata. Following representatives of various organizations had attended the meeting.

After detailed review of the functioning of JAC, it was felt that, not only apex JAC but also the local JACs have to be reactivated to carry on the course of sustained actions involving the entirety of the Accounts and Audit fraternity.
To begin with, the Convener would write to all the constituent organizations and enquire from them whether they are interested in continuing the function with commitment in the JAC at the apex as well as at local levels. Only those organizations who express their willingness to function under JAC would be taken as constituents of the apex JAC.
A next meeting of the apex JAC may be held on 26th July 2012 where it is expected that Unit representatives of all the constituent organizations would be available to participate in March to Parliament under the Banner of Confederation and in this meeting, not only the apex JAC but local JACs could be reconstituted. Thereafter, a decision of holding Convention shall be taken for the purpose of reorientation of the Charter of demands and approach for the persuasion of the demands.
The meeting also decided that, the address for the apex JAC shall be the address of the Convener and e-mail id shall be opened exclusively for apex JAC.
With warm greetings,

Your attention is invited to the decision taken in the last meeting of the apex JAC held on 29th April at Kolkata which are mentioned in the enclosed circular. Accordingly, you are requested to indicate whether your organization is desirous of continuing in the JAC both at the apex as also the local JAC levels. In other words it would mean that you give firm commitment that, you will implement all the decisions of the apex JAC and in the sustained struggle which would be launched from time to time. You are also requested kindly to ensure that, Unit representatives from all stations do come and participate in the March to Parliament on 26th July 2012 which is being organized by the Confederation. on the same day after the March to Parliament, the joint meeting of all the constituent organizations comprising of  their apex as well as Unit leaders would take place at Chug Dharamsala, Udyan Marg, Opposite, BirlaMnadir, New Delhi 110001  at 4p.m. and fresh apex JAC as well as local JACs could be constituted.
This meeting will also discuss and take decision of holding a Convention for the purpose of reorientation of the Charter of Demands and action programmes in support of the charter of demands.

Posted by national federation of civil accounts accociations at 6:39 AM No comments:

Since the above discussed situations are untenable, members of both the Associations shall observe Protest Day on 8th June 2012 against apathetic attitude of Civil Accounts Authorities by wearing Black Badges for the whole day.

This is for your kind information and necessary action please.

Thanking you,
Yours Sincerely,
Enclo: Charter of Demands

1.       Filling up of vacant posts
2.      Settlement of VI CPC related issues:
Upgradation of LDCs by redesignating them as Accounts Assistants and grant of   following pay scales and grade pay to different cadres-
a.  Accounts Assistant-PB 1 with grade pay of Rs. 2400
b.  Accountant/DEO – PB 2 with GP of Rs. 4200
c. Senior Accountant/Steno Gr. 1 – PB 2 with GP of Rs. 4600
d.  Senior Accountant with II ACP – PB 2 with GP of Rs. 4800
e. AAO/PS-PB2 with GP of Rs.4800–3 with GP of Rs.5400 on completion of 4 years.
3.         Creation of PAOs/ Posts in all Ministries/Departments and strengthening of Internal Audit of Government Departments and Organizations, aided financially, by the Government.
4.      Deportation of all deputationists and increase in promotional quota for Senior Accountant as AAO to 30% of posts of AAO and removal of condition of 53 years of age for promotion.
5.      Grant of recognition to AICAEA CAT-II and implementation of check-off system as per Government instructions.
6.      Grant of I & II financial upgradations under original ACP Scheme and benefit of III financial Upgradation under new MACP Scheme.
7.      Grant of benefit of II ACP to Sr. Accountant appointed as Accountant on passing departmental competitive examination conducted by SSC.
8.      Grant Pay Scale of Rs: 1350-2200 from 01.01.86 to DEOs as has been granted by the Defence Accounts Department as well as in terms of the CAT judgments.
9.      Restoration of 5% promotional quota to the post of LDC for GR-D/MTS.
10.      Settlement of cadre problem in PAO, CRPF arisen after amalgamation of the office in Civil Accounts Organisation.
11.      Decentralization of CPAO and formation of regional offices to make the very purpose of operation of Pension Accounting Offices effective and conveniently accessible to old aged Pensioners.
12.   Adaptation of mutually agreed transfer policy for AAO and implementation of the policy transparently
13.    Settlement of all compassionate appointment cases.
14.   Grant of 4 increments on passing DCT between the periods 01.01.73 to 31.05.81 and for others, for passing DCT, 3 increments.
15.   Supply of Copies of orders/OMs of general interest of staff to the Association in terms of the Government of India as well as CGA's instructions and placement of orders/circulars in the website of CGA.
16.   Provision of amenities to the central office of AICAEA.
17.   Provision of adequate amenities for finalization of Pre-2006 cases, without which, the deadline of 31.11.12 could not be met.
18.   As has been done in earlier occasions and granted by Defence Accounts Department, grant of honorarium for checking of pay fixation cases and pension cases after implementation of 6 CPC recommendations.
19.   Provision of imparting training to candidates appearing for DCT.
20.   Issuing of Gradation Lists of all cadres immediately.
Posted by national federation of civil accounts accociations at 9:48 AM 1 comment:

E-PAYMENT
In the Meeting the introduction of “e-payment –Gateway” system was discussed. The salient features of the system were discussed in length.
It has been noted that while the CGA circulated the pilot study during December/2011, there was no such proposal for extending the “e-payment gateway” to the CDDOs of the departmental DDOs. However, as per the recent amendment made by the CGA in the Receipts and Payments Rules, the electronic gateway was opened to the departmental DDOs also.  So there is a possibility that in future, the CDDOs may be allowed to upload voucher classification details and “e lekha” upload directly by them to the CGA, on daily basis which may come to the knowledge of the concerned PAOs, only during compilation of monthly accounts.  Thereby, it is feared that in future, the importance of the accounting functions of the PAO would get marginalized by the department.
Apart from the above, it has been noted that the posts of Cashier, Cheque Writer as well as the work of Expenditure Scroll Posting at PAO Level would be reduced, thereby; such posts would be abolished in future.
After the discussion, it was finally decided upon that every branch would discuss about the system in details and present their view in paper in the ensuring CWC Meeting to be held in Pune, so that a consensus can be arrived at that meeting. Till then opposition to e-payment shall continue.

CADRE RESTRUCTURING
Cadre restructuring is due for a long time. In our Civil Accounts Set up, Cadre Restructuring has not been done for a pretty long time.  Whereas, in Revenue Departments particularly in CBEC/DBDT this issue has been taken care of and in CBDT it is already approved by the Ministry of Finance.  In CBEC it is on the move.
So it is presumed that in other ministries also the same would be the case.
So it is high time that we demand for the Cadre Restructuring so that some of our demands would be filled up.
In this connection, it is noted as per the recommendations of the VI CPC, the cadre
controlling authorities may undertake “Restructuring” in line with their grant of grade pays according to posts/scales. It was emphasized in the CPC Report to finish the task of restructuring before the date
But so far our CGA has not taken any positive step in this regard. The matter has not
even been initiated at the discussion level with the representatives of the Associations.
So it was decided unanimously in the meeting that all the Branches after discussion at their level, shall submit written proposal so that a uniform decision may be taken at the Federal Executive Meeting at Pune.

MEETING WITH C.B.D.T.AUTHORITIES
The delegation of Delhi based Federal Executive Members had met the Pr.CCA, CBDT on 13th March 2012 and requested him to convene a meeting with the representatives of the Federation on the 12 items submitted though the letter dated 13trh March 2012 itself.  Though he assured to convene the meeting, but no meeting was convened by him. He is not having any intention to settle the demands. Further, the local administration of Mumbai has been harassing the employees including the lady employees.
The meeting of the Federal Executive directed Secretary General to write a fresh letter to Pr.CCA, CBDT and take further course of action according to the demand of the situation.
CADERISATION PROBLEM IN PAO, CRPF
After encadrement of the employees of PAO, CRPF in the Civil Accounts Organisation, supervisory cadres of the office have been granted the status of AAO but not the Grade pay of Rs.4800/-. This being a serious anomaly the meeting adopted it as a part of the Charter of Demands and also directed Secretary General to take up the matter with CGA and CCA, MHA.
J.A.C. MEETING
The meeting o the apex JAC of Audit and Accounts Employees and Officers Organizations was held at Kolkata on 29th April 2012. Many organizations including AIAOA were present in the meeting and opined that the JAC at all levels should be revived. As far as Civil Accounts is concerned, all available National Level office Bearers were present. It has been deiced by the meeting that, all apex level constituent organizations shall be written a letter seeking their commitment for participation in all decisions of JAC. The representatives of JAC constituents shall meet at Delhi on 26trh July 2012 after the March to Parliament.

Posted by national federation of civil accounts accociations at 9:18 AM No comments:

Immediately after the Daylong Dharna staged by the Federal Executive Members of NFCAA on 10th May 2012  in front of the  C.G.A. Office on various demands including the demand of removal of corrupt officer of PAO, Central Excise, Madurai, the office of CGA vide OM. No. A 32014/1/2010/MISC. /MFCGA/Gr. B/207 dated 11-05-2012 had issued orders for transfer of the said officer from Madurai to PAO, Customs, Tuticorin.

THE DEVELOPMENT BEING AN ACHIEVEMENT OF THE ORGANIZATION, WE CONGRATULATE ALL MEMBERS AND MEMBERS OF PAO, CENTRAL EXCISE, MADURAI ESPECIALLY FOR THEIR SUSTAINED FIGHT.

THIS ACHIEVEMENT ONCE AGAIN ESTABLISHED THAT - TRADE UNION MOVEMENT IS STILL RELEVANT AND THERE IS NO SUBSTITUTE TO UNITED MOVEMENT.

Posted by national federation of civil accounts accociations at 3:04 AM 1 comment:

During his visit, Secretary General also visited the CBEC and CBDT Units at Kanpur. Leaders of CBDT Unit, Kanpur made all arrangements for visiting the Units at Kanpur. Secretary General addressed General body meetings in both the Units and requested them to strengthen the organization. He also requested them to attend the 5th Federal Council Meeting to be held at Pune on 15th and 16th June 2012 and prepare for participating in the March to Parliament on 26th July 2012 in support of the 14 point demands adopted by the Confederation of Central Government employees &Workers. Leaders of Kanpur assured that they shall participate in all the action programmes and also extend their full co-operation to the National Federation of Civil Accounts Associations on all matters.
-0- 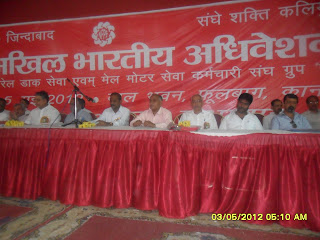 View of the Dias 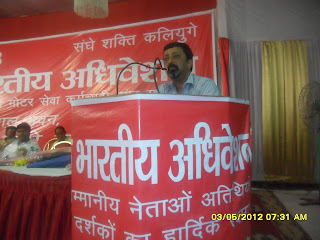 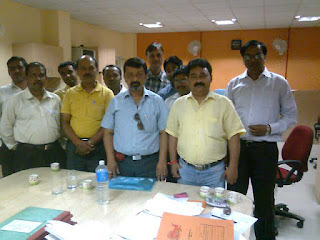 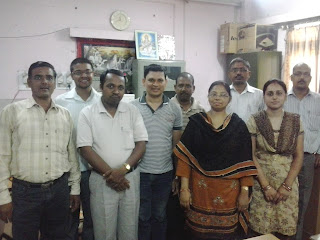 Posted by national federation of civil accounts accociations at 1:56 AM No comments: