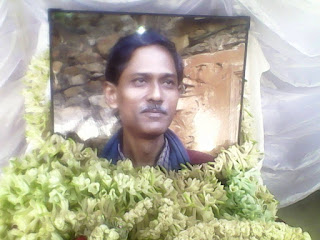 Com. Debasish Dutta Gupta , Sr. Accountant of PAO, Printing, Min. of U.D. Kolkata has passed away suddenly on 24th March 2016 at the age of 59 years while fighting a gallant struggle against pancreatic cancer. We mourn the sad and untimely demise of Com. Dutta Gupta.
Com. Duttagupta was born on 25th Nov, 1956.  After completion of studies he joined service in DGS&D, Delhi as LDC in 1982 and was transferred to PAO Supply, Kolkata in 1983. Since then he was a very good member and supporter of A.I.C.A.E.A. He took part in all struggle under the banner of A.I.C.A.E.A as well as in other democratic movement. He also discharged the duty of  Jt. Convenor of “Committee for Annual Sports and Cultural  Meet of  Civil Accounts Employees of West Bengal, Kolkata”- a common platform of unifying Civil Accounts Employees of West Bengal under one umbrella for Sports & Culture. Further, he discharged efficiently duty of Director and Chairman of “Supply Accounts Co-operative Credit Society Ltd.” For the benefit of Civil Accounts Employees under the auspices of A.I.C.A.E.A. After downsizing of PAO Supply Deptt., he was transferred to PAO Printing, Min of UD Kolkata on Feb 2002 along with other staff members. He was posted in RTC, INGAF, Kolkata since February 2007.He was diagnosed with pancreatic cancer in Feb.2015 and was fighting against the killer disease valiantly till his demise . He was posted back in his parent office PAO Printing,  Kolkata in March 2016- a few days ahead of his demise. He was a perfect gentleman and discharged his duties in all the offices efficiently as a loving colleague to all.  While protesting the process of down sizing of PAO Printing office in 2005 by the Authority , the entire leadership of A.I.C.A.E.A. PAO Ptg. unit were attacked by the authority , three of them were transferred to other office , served with show-cause followed by charge sheet  under rule 14 with the motive to impose major penalty to them including retrenchment. Com. Dutta Gupta stood by the comrades firmly against the  vindictive corrupt local Authorities who were involved in gross malpractice in shifting of office and finally the Comrades were exonerated honorably of all the charges.
We convey our heartfelt condolence to the bereaved family.