SOME OF THE PHOTOS OF XIII WORLD CONGRESS OF TUI PS&A HELD AT LARNACA, CYPRUS ON 16TH & 17TH NOVEMBER, 2019 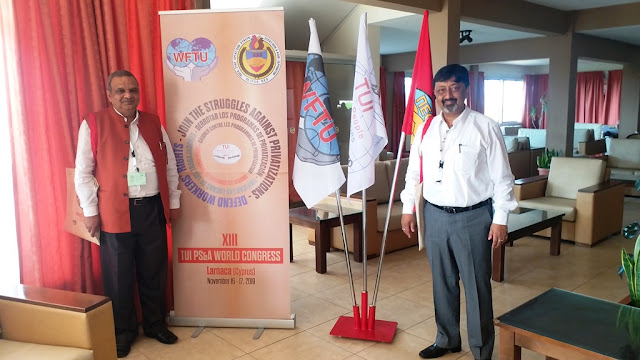 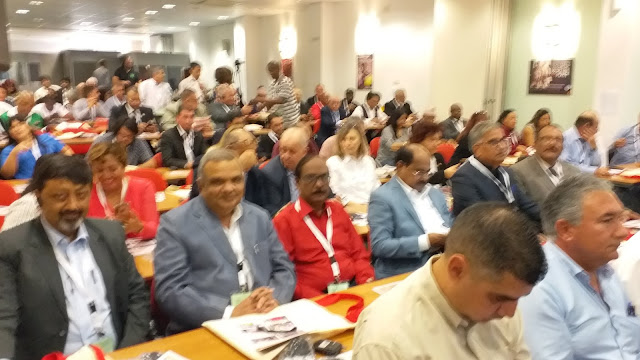 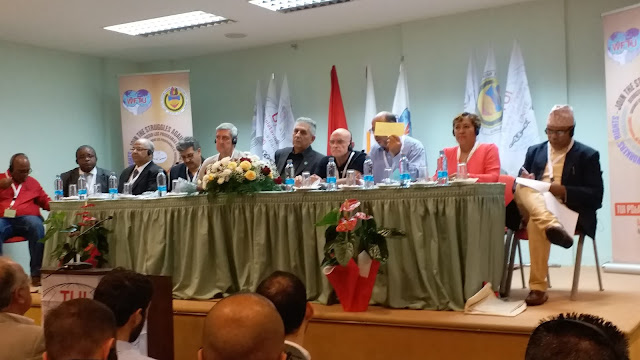 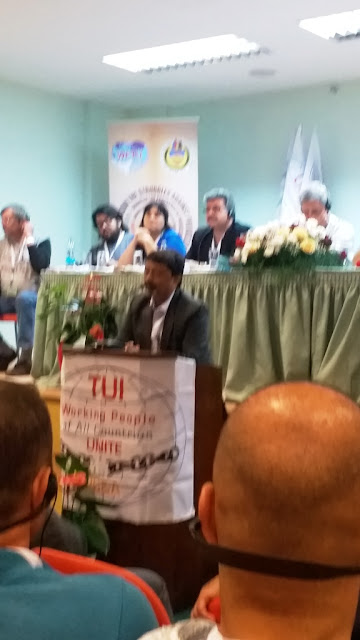 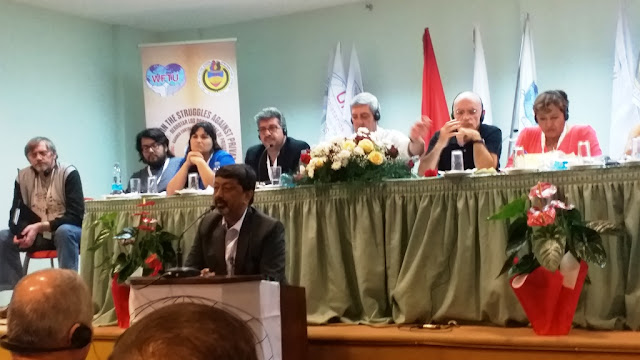 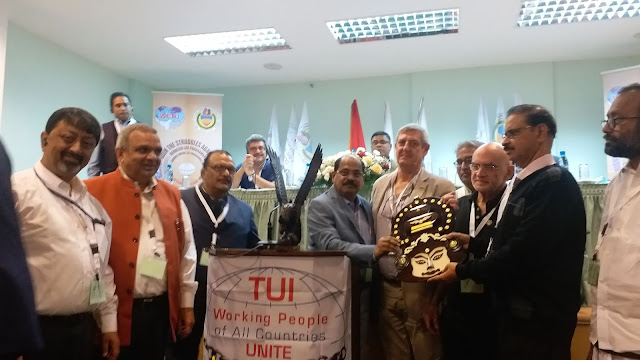 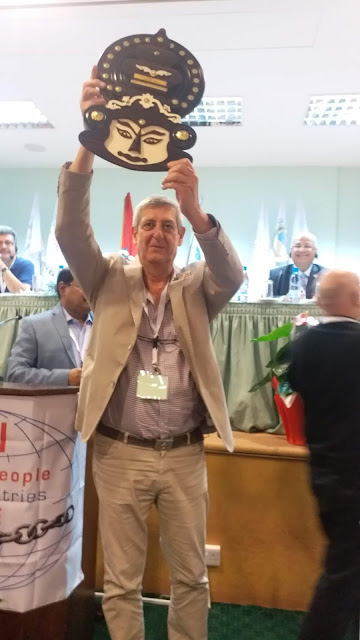 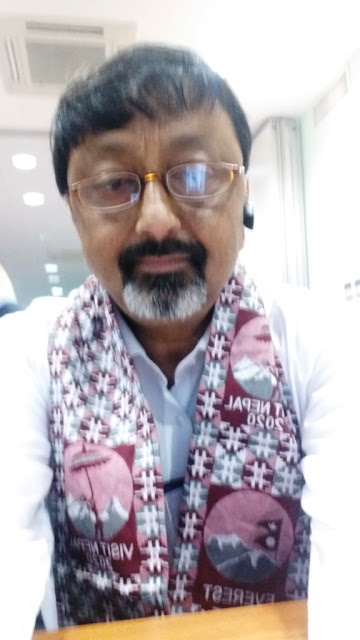 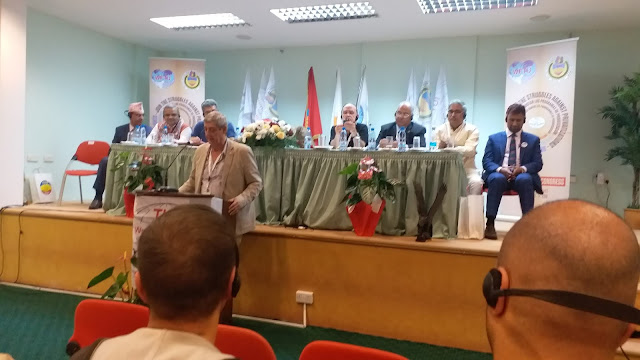 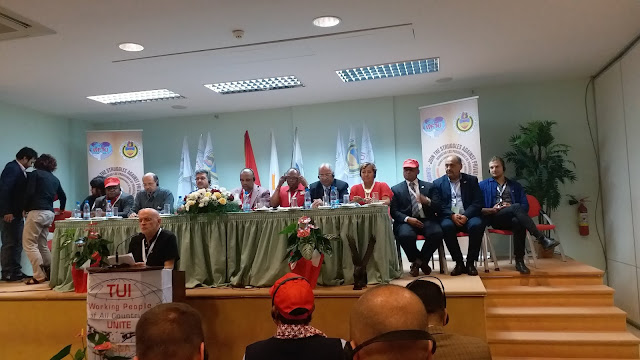 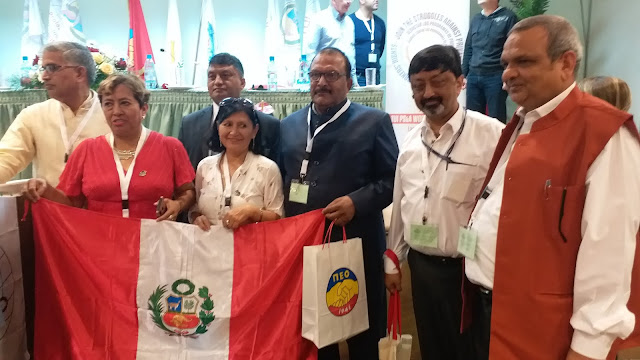 The XIII World Congress of the TUI, PS&A was held at Parvolia, Larnaca, Cyprus (Europe) on 16th and 17th November, 2019. Altogether 92 delegates from 22 (Twenty Two) countries across the world had participated in the congress. 19 (Nineteen) Women Delegates from different countries were also the part of total number of Delegates.

The XIII Congress was inaugurated at 10 AM on 16th November, 2019. The welcome address was offered the General Secretary, Receiption Committee, Cyprus.

Com. Peirpaolo Leonardi, General Secretary, TUI PS & A had placed the introductory speech in terms of the report circulated on behalf of the Secretariat. In his speech he explained the Global scenario and endeavored to stress the need for building up the united struggle of working class worldwide against privatization and defending the rights of working class. He had also appealed upon the delegates to participate in the deliberation critically so that proper review of the activities could be done and future path of TUI PS & A could be decided in a right direction.

Com. Ram Niwas Parasar, Asstt. Secretary General, Confederation of Central Government Employees & workers and Com. Subhash Chandra Lamba, President, All India State Government Employees Federation were made the members of the presidium during the session that had continued on 17th November, 2019.

While endorsing the report, the Delegates who participated in the discussions narrated the challenges facing by the working class of their respective countries and the approaches being adopted by them to fight the challenges. Majority of the speakers expressed their opinion for forging unity among the workers across the world and building up strong resistance against fascism, capitalism, racism, gender discrimination and communalism etc. the incidents of  Privalisation, outsourcing, work shrinkage, unemployment, jobless growth and curtailment of Trade Union rights worldwide were finding prominence in the deliberations of Delegates.

The delegates from India in specific have appraised the house that totality of working class of the country shall embark on a day’s strike on 8th January, 2020 opposing the anti-people and anti-worker policies of the present Government. They reported that the country is in recession and National Pension System, Privatization, outsourcing, denial of minimum wage, closure and retrenchments are the major confronting issues for the working class of the country and they are committed to fight the onslaughts. All the speakers have also offered their assurances of implementing the decision of XIII Congress of TUI PS&A. The participants in the deliberations have also stressed that the TUI PS &A needs to be and expended and strengthened further by composing Continent wise regional organizations and adopting the mechanism of democratic centralism.

Delegates from different organizations and countries have greeted the President and the Secretary General by presenting mementos representing the tradition and culture of their countries and ethos of workers class movements.

The Indian delegation has also presented two separate mementos to the president and the Secretary General of TUI PS&A.

After the deliberations by the Delegates were over, Com. Gorge George Mavrikos, General Secretary, WFTU had offered his valuable speech enrichened totally with   the guiding principles and road map for the unity and struggle. He had presented an in-depth analysis of the challenges before the working people of the world. He had appreciated that the presentations made by Delegates were truthful and confined with progressive thoughts. Appreciating the reporting’s and proposals of speakers from Confederation of Central Government Employees and Workers AND All India State Government Employees Federation of India, he greeted the Indian working class who are embarking on a day’s strike on 8th January, 2020 against the anti-working class and anti-people policies of Government of India. He also stated that; working class of India should not feel isolated in the struggle as the WFTU and totality of its membership stand beside Indian working class. Referring to the proposal for expansion of the formation of democratic forum of TUI PS&A by forming Continent wise regional platforms and infusing the practice of democratic centralism in decision making, he appreciated and informed that Com. Swadesh Deb Roy, who is the Deputy General Secretary of WFTU and TUIS and also the Internal General Co-ordinator from India, has already engaged himself for the task. Com. Mavrikos appraised the house that, more and more organizations and countries are aligning with the WFTUs and the TUIS. World Congress of Textile workers and various other cross sections of working people are in the pipe line. Further, as per the target set in Durban, the strength of membership of WFTU has reached to 97 Million and it is expected that target of 100 Million would be able to be reached before the next Congress.

After being declared as elected Com. Zola Saphetha, newly elected General Secretary addressed the house. In his brief but inspiring written speech Com. Saphetha re-affirmed that the slogans of “Workers of the world Unite-Workers have nothing to lose but their chain” is still relevant. He further stated that, all workers of the world shall be appealed to join the struggle against privatization. He also proposed that an urgent Secretariat shall be convened in South Africa by March, 2020 to decide about the further approach to be adopted to build up unity to carry forward the struggle to promote the causes of the working class throughout the world.

Posted by national federation of civil accounts accociations at 9:22 PM