The flag of the NFCAA was hoisted by Com. T. R. Janardanan in the premises of CWPRS, Guest House, Khadawkasala, Pune on 15th June 2012 at 10A.M. Com. K. V. Jairaj, Organizing Secretary, Confederation of Central Government Employees and workers and Secretary General, Atomic Energy Employees Association, Shri Vivek Valenkar from Alert Citizen forum, Com.B.K.Kamble, President, COC of Central government Employees & Workers, Pune and many other eminent leaders of different organizations of Pune, Members of AICAEA, AICAEA CATII and AICAPAO© were present during flag hoisting and offering tribute to the martyrs. All Guest leaders and Federal Councilors had offered floral tribute to the martyr's column.

After flag hoisting and offering of tribute, a colorful procession of Guest leaders, Federal Councilors & local members of the Branches of Pune had marched to the conference of Hall of the CWPRS where the Inaugural Session of 5th Federal Councilors meeting was held.

Councilors' session was held on 16th June 2010 from 11 A.M and concluded at 4.30 P. M. For the smooth conduct of the sessions of the 5th Federal council meeting, a Presidium Comprising Com T. R. Janardanan (President), Com. M. S. Bharne, Com. S.P.Roy, Com. L. K. Salve, (All Vice Presidents) was formed. The Councilors session was inaugurated by Com. A. B.Sunil Kumar, President, All India Association of Pay and Accounts Officers (Civil). In his speech, Com. Sunil Kumar dealt on the problems like non-filling up of vacant Posts and non- settlement of the demands on the pay structures of the Employees and Officers of the Civil Accounts Organisation. He further stated that, TO achieve the demands of all cadres, there should be a broader Unity among the members of NFCAA and AIPAO©

The review report of the activity of National Federation during the period between June 2010 and May 2012 and the audited Accounts report for 2009-10 and 2010-11 were placed by Com. V.Bhattacharjee, Secretary General and Com. S. Bandyapadhyay, Finance Secretary, respectively for consideration of the Federal councilors.  To pay respect to the departed persons, one minute silence was observed by the house. The report placed by the Secretary General and Finance Secretary were unanimously adopted by the house by raising the hands.

Thereafter, the meeting discussed different items of agenda and took discussions on those. The decisions have been reported separately. The meeting also adopted three resolutions on different issues. The 5th Federal Council elected a 15 members office bearer for the next term.

COMPOSITION OF THE COUNCIL

1.      Regularization of outsourced employees against the vacant posts shall be made a part of the Charter of Demands.

2.      Since new CGA would take over the Charge of the Civil Accounts organization with effect from 1ST July 2012, no organizational action in support of the demands shall there till the new CGA takes over and gives his reaction against the demands.

3.      A   Resolution condemning the installation of the CCTV camera inside the office room of the PAO, BSF, Delhi and also in other offices of the Ministry of Home Affairs shall be forwarded to all the authorities concerned.

Discussion on this item was initiated by Com. K.Venkata Subramaniam, Jt. Secretary General and he was supplemented by Com. V. Bhattacharjee, Secretary General. Com. R. G. Brarne, Mumbai and Com. P. Acharya Kolkata participated in the discussion. However, the house altogether was against the unilateral imposition of the e-payment system in the Civil Accounts Organisation and also was of the view that the matter should be discussed by the authority to resolve it across the table.

It was decided by the house that opposition to e- payment system shall continue and a resolution shall be forwarded to the CGA demanding dialogue on the issue.  All Units shall also send a resolution to CGA and other authorities.

The item was initiated by Com.S.P.Roy,

Vice President. Com.V.Bhattacharje reported to the members that the Principal CCA, CBDT (Present CGA) had agreed to convene a meeting with representatives of the AICAEA on some of the serious problems concerning with employees of different ZAOs. The meeting was agreed to be convened by him in April 2012. but subsequently he had backed out without assigning any valid reason.  This is not at all appreciable. However, some of problems referred by the Association have been resolved by his office in the mean time.

Retaliating the letter of the AICAEA to Pr. CCA, CBDT on the various anti-employee activities of the CA, CBDT, Mumbai, the  CA, CBDT, Mumbai had ordered for deduction of pay of the employees participated in the one day general Strike on 28th February2012. This matter was brought to the notice of the Pr. CCA, CBDT by the ZAO, CBDT Unit, Ahmedabad when he visited the station. Pr CCA had assured to undo the orders CA, CBDT, Mumbai.

The Federal Council meeting directed Secretary General to take up the matter directly with the Pr. CCA, CBDT. (The matter was taken up with the Pr.CCA, CBDT and as per his desire; a letter was written to him. But despite repeated persuasions, his secretariat did not agree to divulge the action taken by him on the letter).

A draft proposal on the Cadre review in the Civil Accounts Organisation was placed by Com. K.Venkata Subramaniam on behalf of the Federation secretariat.  Com. P. Acharya (West Bengal), Com. A. Huparikar and Com. P. M. Viswamitra (Hyderabad) participated in the discussion. However, due to paucity of time, majority of the Councilors could not study the document properly and hence most of them were not in a position to place their views in this respect.

Therefore, it was decided that, since the subject is of vast nature and needs thorough study before offering any comment or view, all Branches   shall discuss the matter in their respective committee/ general body meetings and send their views within 26th July 2012. Representatives of Federation secretariat shall examine those views and submit the final proposal for cadre review to the authorities within the Month of August 2012.

Initiating the discussion, Secretary General informed that, for the success of the March to Parliament on 26th July 2012 in support of its 14 Point Charter of Demands, the Confederation has drawn up an extensive tour programme for mobilization of the members from entire country where some of the office bearers of NFCAA have also been included. The Civil Accounts has been asked to mobilize at least 500 employees. Accordingly, the meeting of the federal executive held on 11th May 2012 at Delhi had decided that;

·         All Units shall depute atleast one member for taking part in the March to parliament.

·         Branches shall mobilize the Units of their station/ state / Branch in such a manner that the numbers of participants are not less than the number of units they are representing (as per the chart furnished below).

·         In order to increase the number of participants and optimize the travelling expenses to a reasonable extent, Branches shall request the retired leaders to extended their help and participate in the March to Parliament.

·         To make the members aware of the demands and the programmes Branch leadership along with available Federal Executive Member in the state/station visit all Units and hold meetings.

·         In order to create the feelings of involvement in the movement among the members, struggle fund @ Rs. 50/-(Rupees fifty) only shall be collected from every member by the Branches. Members may show reservation in contributing, but they are to be requested to contribute for meeting the extra burden of travelling expenditure for participation in the March to Parliament by their representatives.

·         Federation Headquarters with the support of the affiliates shall arrange food and lodging of the participants for the March to Parliament.

Taking part in the discussion, Com. Jagdish had informed the house that, per the quota allotted to Delhi branch, all attempts for mobilization of required numbers of employees shall be made. Similarly, fund shall also be mobilized for the fooding and lodging of the persons who shall be coming to participate in the March to Parliament from other stations.

It was decided by the meeting that, all Branches shall take sincere effort to increase the number of participants.  Following stations hall be visited by the Federal Executive members:-

It was reported in the meeting that the representatives of JAC constituents shall meet at Chug Dharamsala,

New Delhi at 4.p.m. on 26th July 2012 after the March to Parliament. The meeting shall deliberate on re-constitution of JAC at all level and reformulation of demands of JAC.

ON THE FOLLWING DEMANDS

Posted by national federation of civil accounts accociations at 9:28 AM No comments:

VIEWS OF THE FLAG HOISTING  OF THE 5TH FEDERAL COUNCIL MEETING  OF N.F.C.A.A.ON 15TH JUNE 2012 HELD AT PUNE 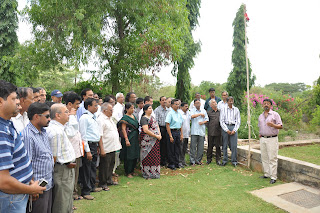 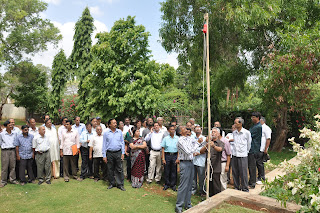 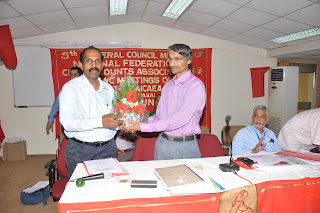 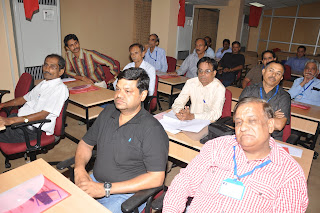 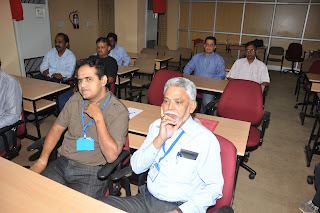 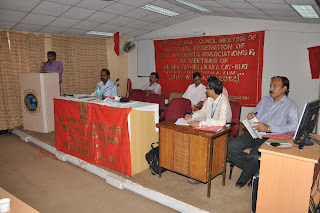 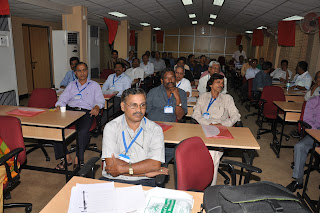 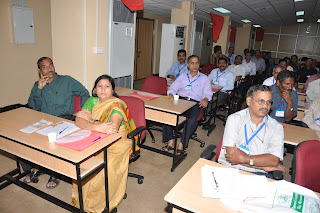 Posted by national federation of civil accounts accociations at 2:41 AM No comments:

The Controller General of Accounts

The list of the office bearers of AICAEA CAT-II as reconstitute in the CWC meeting held in Pune on 15/06/2012 and 16/06/2012 is enclosed herewith for your kind appraisal and necessary action please.

I take this opportunity also to request your good office to invite the office bearers of this Assn. to a courtesy meeting to increase the level of confidence among our members.

Posted by national federation of civil accounts accociations at 1:50 AM 1 comment: