It is a pleasure to inform  that the 9th Voluntary Blood Donation Camp was organised  jointly by All India Civil Accounts Employees Association and All India Civil Accounts Employees Association, Cat-II, West Bengal Branch on  21/0/2016 at Supply Accounts Institute Hall, Kolkata to commemorate the 9th death anniversary of our beloved leader Com. Ajoy Bhowmick, founder, friend, philosopher & guide of Civil Accounts Employees Association and pioneer of central govt employees movement. The camp was inaugurated by Com. Goutam Pramanick, eminent leader of IA&AD and COC West Bengal. Veteran leaders of Civil Accounts along with a good number of  enthusiastic Civil Accounts Employees were present  in the camp to witness the noble act towards humanity  as well as to encourage the Blood Donors. Amongst them Com. Pijush Roy. Secretary, COC, West Bengal, Com Pradip Ray, Com. Basudeb Roychowdhury and other leaders were present.  52 donors including 6 lady comrades donated blood in the camp. It is noteworthy that the younger generation came forward to donate blood generously. The camp  had a grand success and was ended by congratulating the Donors, volunteers, veteran leaders and members present in the camp.
Pranab Acharya.
Jt. Secretary,AICAEA, W.B.Br 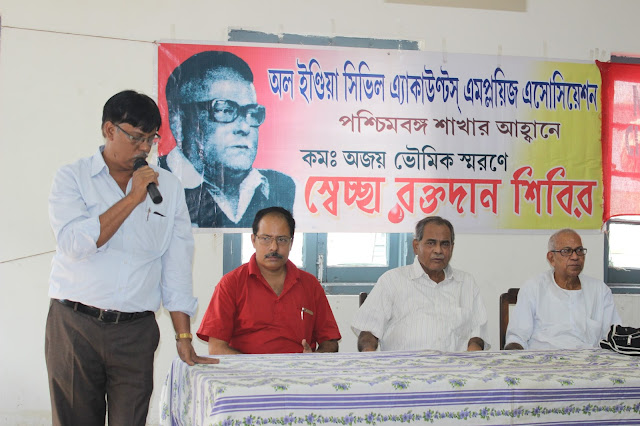 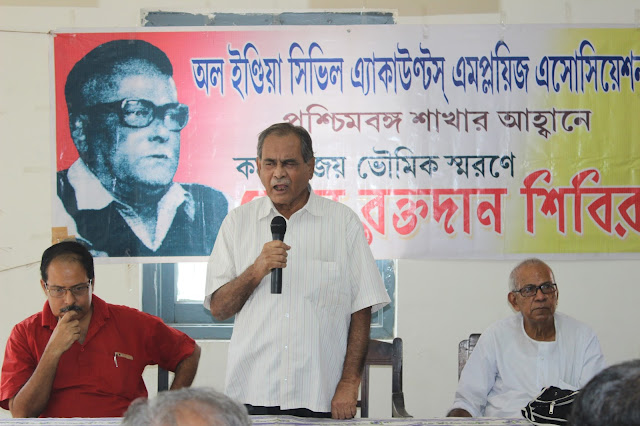 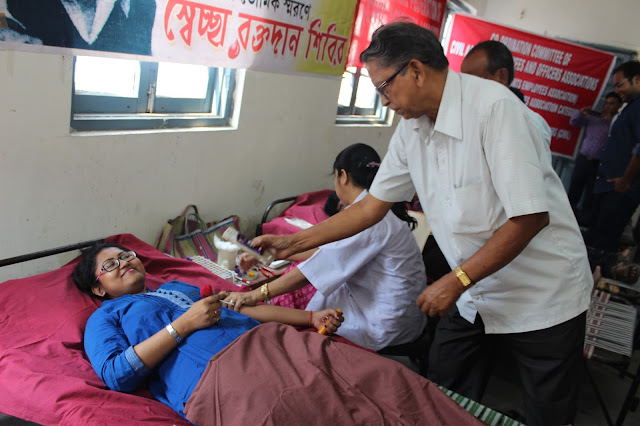 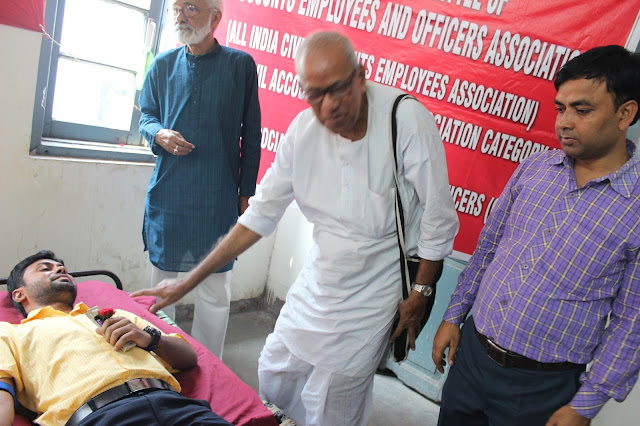 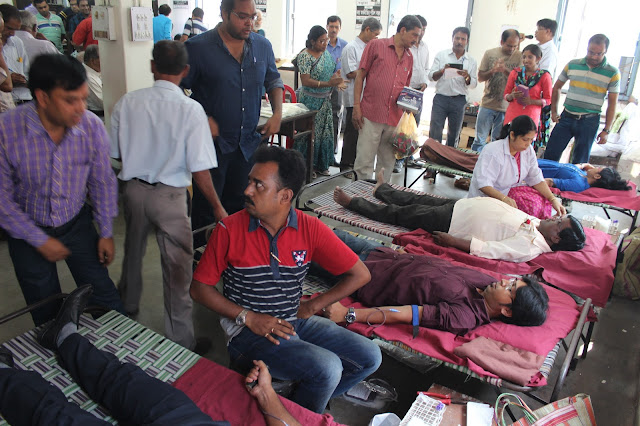 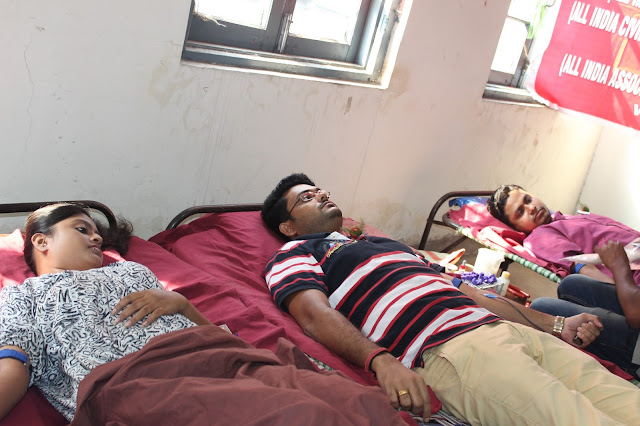 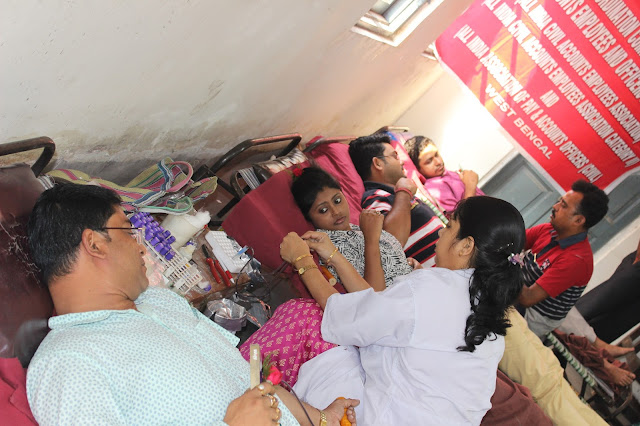 Posted by national federation of civil accounts accociations at 9:04 PM No comments:

Dear Comrades,
SIGNATURE CAMPAIGN
It has been observed by the apex level COC of Civil Accounts Employees and Officers Associations that, some Branches/stations haven't been able to complete Signature Campaign and the Branches of Delhi, despite their best efforts could not reach to some of the offices so far for collecting signatures.
Under the above circumstances, the apex COC has decided to extend the process of signature collection upto 11th November 2016. All signatures collected shall be accumulated at apex COC and handed over to CGA on 16th November after the Central Dharna on that in front of CGA Office.
The draft of the sheet on which Signatures of the members of all constituents of COC are to be taken had been circulated vide COC Circular No:- COC/CA/2016/Cir-4 dated 23.09.2016. But, we have learnt that some of our Branches have not received the circular. Therefore we are once again attaching draft of the sheet on which Signatures of the members all constituents of COC are to be collected. The COCs that have not started collecting signatures yet are requested again to initiate the same without further delay.
STATION WISE MASS DHARNA ON 26TH OCTOBER 2016
As circulated already, all state/local/ regional COCs are requested to organize Mass Dharna jointly in front of the office of senior most Officer of the station on 26th October, 2016 without fail. The Dharna should commence before 11 A.M. without fail and it should not be ended before 4 P.M.
We hope all shall appreciate the decision taken by COC under the compelling situation and take all necessary actions for  making the programmes of signature Campaign,  Branch wise Dharna on 26th October and Central Dharna in front of CGA Office on 16th November 16 totally successful.
A massive lunch hour meeting should be organized on 26th October, 2016. Following resolution may be sent to CGA on that day.
RESOLUTION
This Joint day ling Dharna of the members of the Co-ordination Committee of Civil Accounts Employees and Officers Associations held today the 26th October 2016 at…………(Name of Station) invites the kind attention of Controller General of Accounts to the letters dated 21-09-2016 and 17-10-2016 of  the apex level Co-ordination Committee of Civil Accounts Employees and Officers Associations.
The apex level  Co-ordination Committee has been requesting the Controller General of Accounts  for last one and a half years to kindly undertake Cadre Review of the Civil Accounts Employees and Officers and also settle ten other priority issues  relating to posting of persons qualified AAO(Civil) examination in 2013-14, conduct the departmental promotional/confirmatory examinations which have stopped for last three years,  grant of recognition to the Associations after the verification of membership of the Associations in terms of the provisions CCS(RSA) Rules, 1993,  restore 10% promotion quota for Senior Accountants, set the promotional benefits of the cadres like AO/Sr/AO, AAO, Acctt/Sr. Accountant, Sr.PS/PS/ Stenographers, MTS, LDC, DEO, and Staff Car Drivers in proper order etc.  But the Civil Accounts authorities have not taken any action so far.
The meeting therefore, registers its protest and resolves that if no favourable decision is taken by the authorities at the earliest, the members of Co-ordination Committee shall resort to sustained and intensified organizational actions.
The meeting further resolves to forward the resolution to the Controller General of Accounts, Ministry of Finance, Department of Expenditure, 4th Floor, GPOA, Block-E, INA, New Delhi – 110023 and the Joint Conveners  of the apex level Co-ordination Committee of Civil Accounts Employees and Officers, Delhi/ Mumbai.

DHARNA BY NATIONAL/FEDERAL EXECUTIVES IN FRONT OF
CGA ON 16TH NOVEMBER 2016
As  decided, the National Executive members of AIAPAO (Civil) All India Civil Accounts Employees Association and All India Civil Accounts Employees Association Cat-II (in addition to Federal Executive members of NFCAA) shall sit for Dharna on 16th November 2016 in front of the CGA office, New Delhi, if the CGA continues his indifferent attitude towards the demands.
We therefore, request all National/Federal Executive members of AICAEA, AICAEA Cat-II, AIAPAO (Civil) and NFCAA to ensure their availability at Delhi on the day scheduled for the Dharna.
FORMATION OF COCs AT STATE LEVEL
The state COCs were already in existence in Mumbai, Shillong, Kerala and Kolkata. Within the stipulated date of 20th September 2016, state level COCs have been formed in following places in presence of the apex COC representatives:-

We  once aging appeal upon all other stations to form the COCs without any more delay.

Dear Comrades, officers and employees of various other Central Government Departments could achieve their demands through united struggle. It is the time for us to unite and launch sustained struggle to achieve those demands which have been kept in cold storage by our authorities and the achieved their objectives at our Cost.
Therefore, please ignore petty differences and built up single rock unity to have a better service career for all of us.

We would like to invite your kind attention to the letter No:- COC/CA/2016/Corr-4 dated 21.09.2016 of the apex level Co-ordination Committee of Civil Accounts Employees and Officers Associations and request you that following demands may kindly be settled at the earliest.

Posted by national federation of civil accounts accociations at 8:10 AM No comments:

CONFEDERATION NATIONAL SECRETARIAT DECIDED TO ORGANISE
NATIONWIDE CAMPAIGN AND AGITATIONAL PROGRAMMES CULMINATING IN STRIKE
·         AGAINST THE TOTALLY NEGATIVE AND INDIFFERENT ATTITUDE OF THE NDA GOVT.
·          AGAINST NON-IMPLEMENTATION OF THE ASSURANCE GIVEN BY GROUP OF MINISTERS TO NJCA
·         DEMANDING IMMEDIATE SETTLEMENT OF THE CHARTER OF DEMANDS

7TH FEDERAL COUNCIL MEETING AT JAIPUR
The 7th Federal Council meeting of the National Federation of Civil Accounts Associations shall be held at Jaipur on 17th & 18th of December, 2016.
Therefore, all Federal Councilors i.e. office bearers of NFCAA, AICAEA, AICAEA CAT-II and the Branch Secretaries are requested to plan their journey accordingly.
Arrangements for transhipment of all Federal Councilors from Delhi to Jaipur would be arranged provided informations are provided before 31st October, 2016.
All informations in this respect should be sent to Com. Harbans Lal, Branch Secretary, AICAEA, Delhi Branch (Mob. No:- 9810558423 E-mail:- harbanslalsori@gmail.com) under intimation to Federation Headquarters.
With warm greetings,
(V.Bhattacharjee)
Secretary General
CHARTER OF DEMANDS
OF CONFEDERATION OF CENTRAL GOVERNEMENT EMPLOYEES &WORKERS
1.       Settle the demands raised by NJCA regarding modifications of 7th CPC recommendations as submitted in the memorandum to Cabinet Secretary on 10th December 2015. (See Annexure-I). Honour the assurance given by the Group of Ministers to NJCA on 30th June 2016 and 6th July 2016, especially increase in minimum wage and fitment factor. Grant revised HRA at the existing percentage itself i.e. 30%, 20% and 10%. Accept the proposal of the staff side regarding Transport Allowance. Settle all anomalies arising out of implementation of 7th CPC recommendations, in a time bound manner.
2.        Implement option-I recommended by 7th CPC and accepted by the Government regarding parity in pension of pre-2016 pensioners, without any further delay. Settle the pension related issues raised by NJCA against item 13 of its memorandum submitted to Cabinet Secretary on 10th December 2015. (See Annexure-I).
3.       Scrap PFRDA Act and New Pension System (NPS) and grant pension and Family Pension to all Central Government employees recruited after 01.01.2004, under CCS (Pension) Rules 1972.
4.        Treat Gramin Dak Sewaks of Postal department as Civil Servants, and extend all benefits like pay, pension, allowances etc. of departmental employees to GDS. Enhance bonus calculation ceiling of GDS also to 7000 from 01.04.2014.
5.        Regularize all casual, contract, part-time, contingent and Daily rated mazdoors and grant equal pay and other benefits. Revise the wages as per 7th CPC minimum pay.
6.       No Downsizing, Privatization, outsourcing and contractorisation of Government functions.
7.       Withdraw the arbitrary decision of the Government to enhance the bench mark for performance appraisal for promotion and financial upgradations under MACP from “GOOD” to VERY GOOD” and also decision to withhold annual increments in the case of those employees who are not able to meet the bench march either for MACP or for regular promotion within the first 20 years of service. Grant MACP pay fixation benefits on promotional hierarchy and not on pay-matrix hierarchy. Personnel promoted on the basis of examination should be treated as fresh entrants to the cadre for grant of MACP.
8.       Withdraw the draconian FR 56 (J) and Rule 48 of CCs (Pension) Rules 1972 which is being misused as a short cut as purity measure to punish and victimize the employees.
9.       Fill up all vacant posts including promotional posts in a time bound manner. Lift ban on creation of posts. Undertake cadre Review to access the requirement of employees and their cadre prospects. Modify recruitment rules of Group-‘C’ cadre and make recruitment on Regional basis.
10.   Remove 5% ceiling on compassionate appointments and grant appointment in all deserving cases.
11.   Grant five promotions in the service carreer to all Central Govt. employee
12.    Abolish and upgrade all Lower Division Clerks to Upper Division Clerks.
13.    Ensure parity in pay for all stenographers, Assistants, Ministerial Staff in subordinate offices and in all organized Accounts cadres with Central Secretariat staff by upgrading their pay scales. Grant pay scale of Drivers in Lok Sabha Secretariat to Drivers working in all other Central Government Departments.
14.    Reject the stipulation of 7th CPC to reduce the salary to 80% for the second year of Child Care leave and retain the existing provision.
15.   Introduce Productivity Linked bonus in all department and continue the existing bi-lateral agreement on PLB wherever it exists.
16.   Ensure cashless medical treatment to all Central Government employees & Pensioners in all recognized Government and Private hospitals.
17.   Revision of Overtime Allowance (OTA) and Night Duty Allowance (NDA) w.e.f 01.01.2016 based on 7th CPC pay scale.
18.    Revision of wages of Central Government employees in every five years.


19.    Revive JCM functioning at all levels. Grant recognition to the unions/Associations under CCS (RSA) Rules 1993 within a time frame to facilitate effective JCM functioning.
Posted by national federation of civil accounts accociations at 9:41 AM No comments: