The Central Government Employees of Delhi State gathered today the 31st December 2012 in front of the GPO, New Delhi at 2.30 p.m. under the banner of Co-Ordination Committee of Central Government Employees & Workers’ Delhi State offer their deepest condolence to the bereaved family of 23 years old rape victim died on 29th December 2012 in Singapore. This gathering also mourns the death of all other known and unknown rape victims.

Resolved to forward this resolution to all concerned.

I am to enclose herewith a Resolution adopted by this Co-ordination Committee today offering Condolence to the bereaved family of 23 years old rape victim died on 29th December 2012 and on the demand of enactment of stricter laws against the convicts of rape and crime against women.

It may be brought to your kind information that, the women employees working in Central Government Departments also confront different forms of Sexual harassments while performing their duties and the rule enforcing authorities seldom implement the instructions of the government to protect the women workers from sexual harassments in work place.   As such, majority of the victims do not get justice and they are compelled to work in an atmosphere of humiliation and insult. We therefore, request you to kindly take appropriate measures to ensure that the women workers in the Central Government offices are able to work in an atmosphere free from humiliation and they get justice against the harassments they face.

VIEWS OF THE CONDOLENCE MEETING 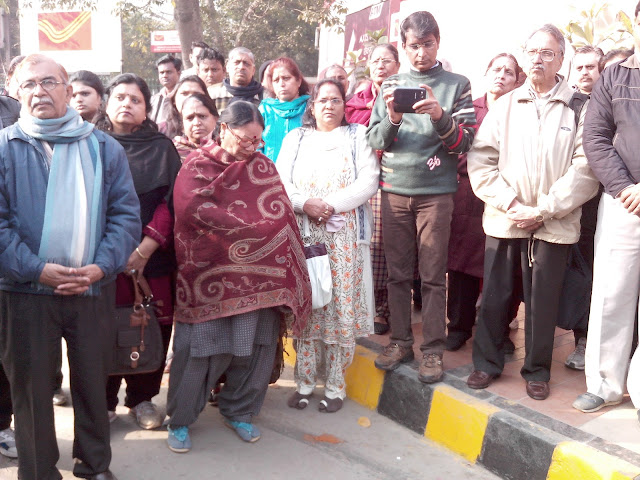 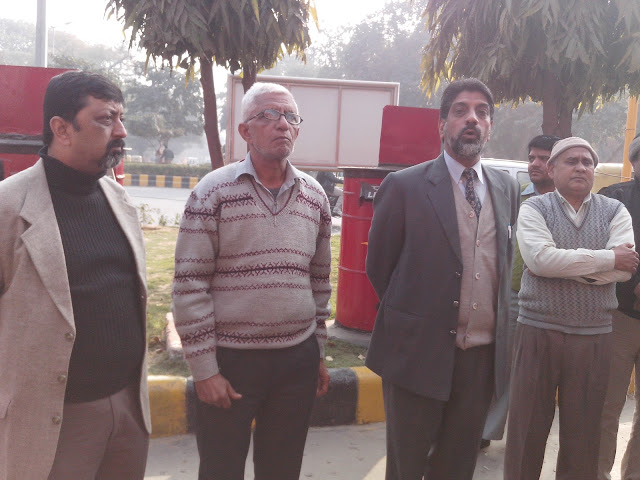 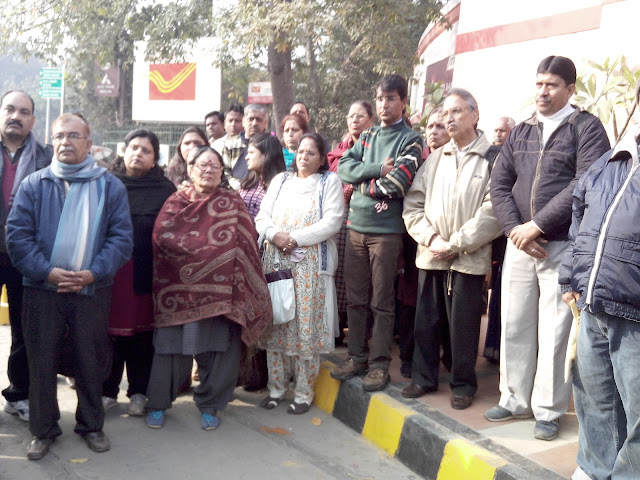 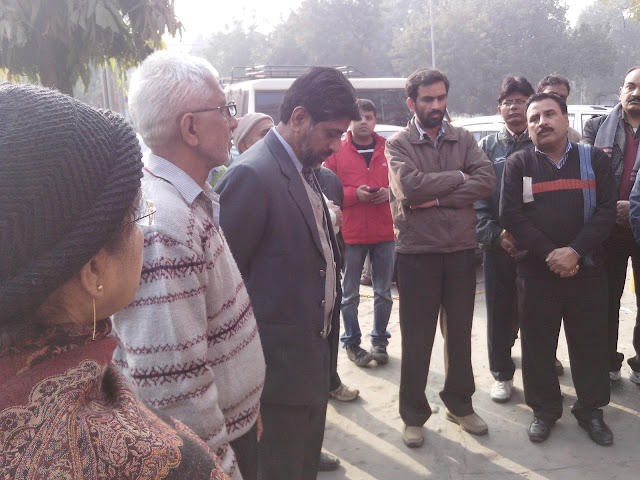 Posted by national federation of civil accounts accociations at 9:12 PM No comments: 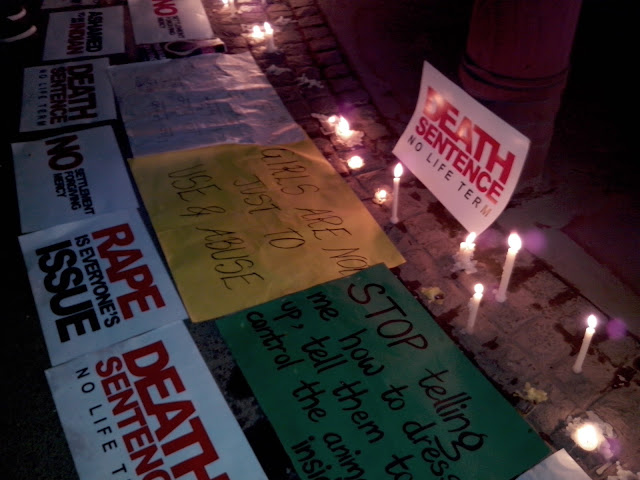 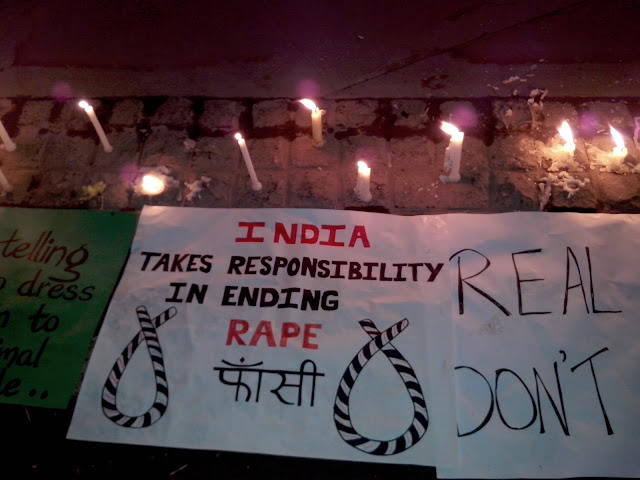 Posted by national federation of civil accounts accociations at 8:33 PM No comments:

WE WISH ALL  READERS OF OUR WEBSITE A VERY HAPPY AND PROSPEROUS NEW YEAR 2013.

Posted by national federation of civil accounts accociations at 8:29 AM No comments:

Com. Bhaskar Sharma,
one of the founder members of NATIONAL FEDERATION OF CIVIL ACCOUNTS ASSOCIATIONS  EXPIRED ON 24TH  DECEMBER 2012. HE WAS SUFFERING FROM VARIOUS AILMENTS.

WE DIP OUR BANNER AS A MARK OF RESPECT TO COMRADE SHARMA AND STAND BESIDE THE FAMILY MEMBERS OF COM. SHARMA .
Posted by national federation of civil accounts accociations at 8:26 AM No comments:

N.F.C.A.A.
OFFERS ITS HEART FELT CONDOLENCE TO THE BEREAVED FAMILY MEMBERS  OF THE 23 YEARS OLD  VICTIM OF 16TH DECEMBER  DELHI RAPE CASE DIED ON 30TH DECEMBER 2012. WE ALSO MOURN THE DEATH OF ALL OTHER RAPE VICTIMS OF THE COUNTRY.

WE DEMAND LEGISLATION OF STRICT LAWS  ON CRIME AGAINST WOMEN AND ALSO FAST TRACK AND STRINGENT PUNISHMENTS TO THE PERSONS CONVICTED AGAINST RAPE AND OTHER CRIME AGAINST WOMEN.
Posted by national federation of civil accounts accociations at 8:17 AM No comments:

One day strike on 12TH December 2012 in support of the 15point Charter of Demand of Confederation had been responded by the members enthusiastically.
According to the reports received at the Federation Headquarters, strike was held in the Branches of North East, West Bengal, Andhra Pradesh, Tamilnadu, Kerala,  Mumbai, Southend (Delhi), Gujrat, Rajasthan, Karnataka, Nagpur, Pune, Nashik, Meerut and Kanpur.  The Strike was total in  entire North East, West Bengal, Andhra Pradesh, Tamilnadu, Kerala, Southend (Delhi) and Mumbai and beyond 80% in Gujrat, Rajasthan, Karnataka, Nagpur, Pune, Nashik, Meerut and Kanpur.  Rajasthan Branch has participated in the Strike for the first time in the history of movement of Civil Accounts Employees. Unlike previous strike of 28th February 2012, large number of Civil Accounts Employees of Branches of Delhi and West Delhi also participated in the Strike. In some of the Units the strike was cent percent.
The percentage of participation in Civil Accounts Employees has placed it in the third position among the affiliates of Confederation.
The Strike therefore, was a grand success in the Civil Accounts Organization and we congratulate all the members and leaders of Civil Accounts Organization for making the struggle a grand success.
The secret behind the success of the strike was the relentless effort of the federal executive members, Branch and Unit Secretaries. They had extended their fullest cooperation and support to the Federation headquarters. Almost all Federal Executive members visited the stations they had been assigned and took all pains to explain the issues to the grass root level members. Leaders of the Branches and Units responded to the requests of Federation Headquarters and did their best to build up unity at the lowest level and made the strike a success.
The Federation headquarters therefore, offers its sincere thanks to all leaders and members who have made the strike a grand success.
Posted by national federation of civil accounts accociations at 8:32 AM No comments:

PREPARATION FOR STRIKE ON 12-12-2012
IN CIVIL ACCOUNTS ORGANISATION IS VERY GOOD.

ALMOST ALL LEADERS OF NATIONAL FEDERATION OF CIVIL ACCOUNTS ASSOCIATIONS (N.F.C.A.A.) VISITED THE STATIONS ASSIGNED TO THEM
ACCORDING TO THEIR REPORTS MEMBERS HAVE RESPONDED POSITIVELY AND EXHIBITED ENTHUSIASM

Initiating the discussion, Dy. CGA informed that CGA has directed him to discuss with us about our decision of resorting to strike on 12th December 2012.  He further stated that the authorities are sympathetic towards the demands of the NFCAA and considering them favorably.

We clarified that the call of the strike has been given by the Confederation of Central Government employees and workers’ in support of the 15 Point Charter Of  Demands which are  common demands of the Central Government Employees. The NFCAA i.e. AICAEA and AICAEA CATII being the affiliates of the Confederation has endorsed the call of strike and the members of NFCAA shall participate in the Strike.  We have also pleaded that since the demands embraces totality of the officers and employees of Central Government departments, no employee should be panelized in isolation by the departmental authorities.

Dy. CGA assured that the outcome of the discussions shall be conveyed to CGA and the authorities would be not vindictive towards the employees.

It is very unfortunate that a section of the lower level officers of CGA office have shown over enthusiasm and issued an order on 3rd December against the strike notice served by us.  They had no patience of waiting till the Dy. CGA discusses the matter with us.

Though their action is a self inflicting damage, but we should ignore it and go ahead.
Posted by national federation of civil accounts accociations at 6:52 AM No comments: