OBITUARY
With profound grief we would like to inform all that, one of the  eminent leaders of All India  Civil Accounts Employees Association  as well as Central Govt. Employees movement in West Bengal, Com. (Smt.) Anju Roy passed away on 22nd June, 2014 in Kolkata at the age of 70 years. She had undergone a brain surgery.  Com. (Smt.) Roy joined Central Govt. Service in 1966 in IA&AD and  had to join  Civil Accounts Deptt. in 1976. She sustained temporary break in service for participating strike in 1968. She was elected as the first founder Joint Convener of Working Women Group of Civil Accounts in West Bengal. 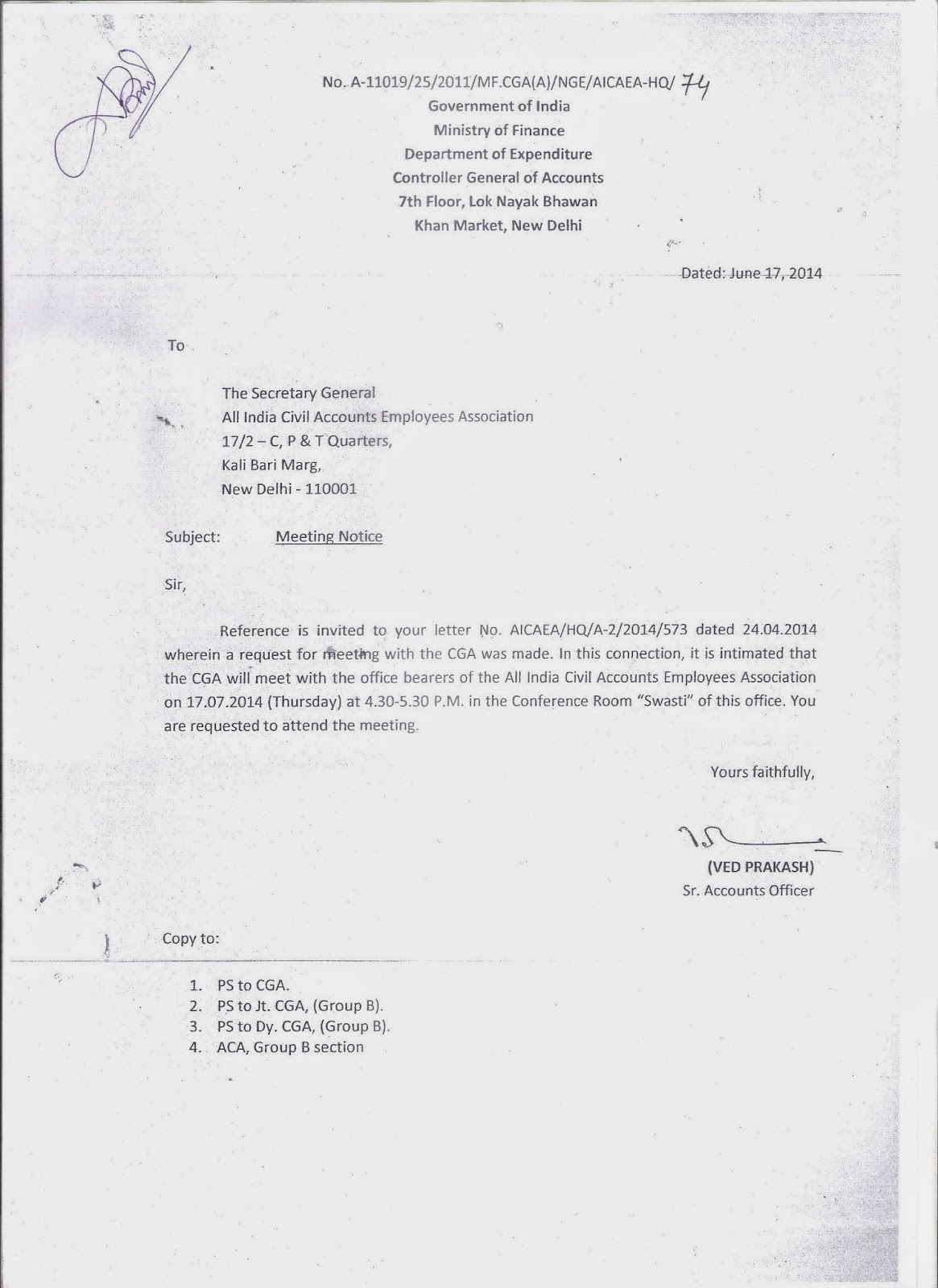 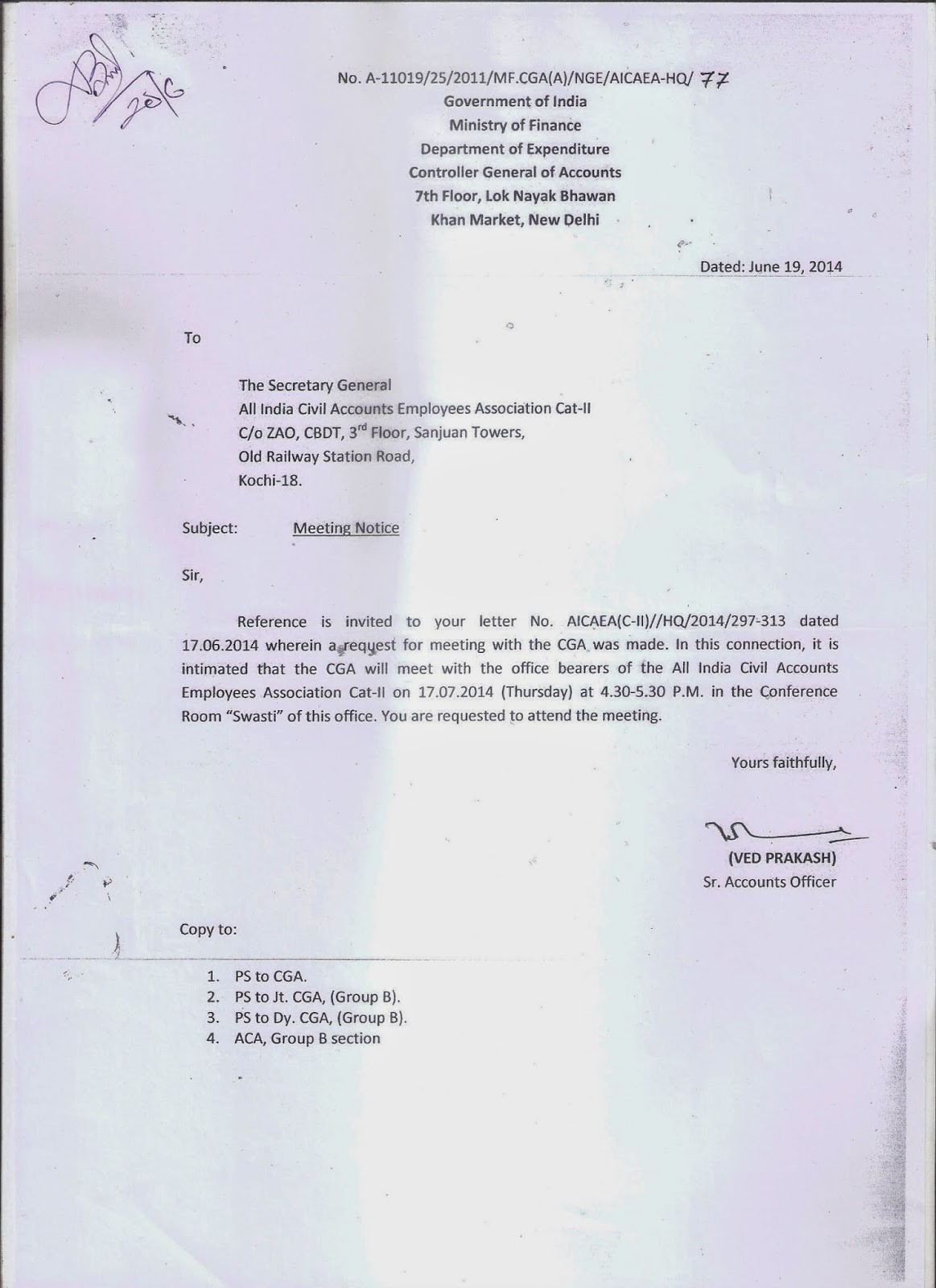 ​
Posted by national federation of civil accounts accociations at 9:52 AM No comments:

Subject: Harassment to the staff of PAO(Census), Delhi by the local administration.

Thanking you,
Yours sincerely

Copy for information and necessary action to:-

The meeting had the presence and guidance of Com SK Vyas.

The meeting after a detailed discussion decided to demand a revised pay structure for audit & accounts cadres in its memorandum to 7th CPC.

The meeting had thorough discussion on the pay scales (ie Pay Band and Grade Pay)  available to audit & accounts cadres, the charter of demands the JAC is pursuing and the changes that the JAC should demand with 7 Central Pay Commission.

After a detailed discussion the conscious and consensus decision was to demand a re-structure in the pay structure of audit and accounts cadres. It was felt that the new pay structure that the Apex JAC would like to demand should be first be placed before the membership.
In this regard, the following decisions were taken:

1. The draft memorandum (with the revised proposals) shall be made available to the Constituent Organisations of JAC by 10th June 2014.

2.  Each Constituent shall cause detailed discussion on the draft memorandum in their field formations through meetings of all sections of membership and explaining the memorandum to them. The memorandum shall be made a subject matter of discussion in such meetings and the sum and substance of the discussion shall be conveyed to the respective HQrs by 25th June 2014.

3.  The Constituent Organisations of Apex JAC shall, after going through the comments received from its field formations shall sum up the same and convey it to Convener,  Apex JAC by 1st July 2014.

4.  Chairman & Convener of Apex JAC shall do the primary task of drafting the memorandum to 7 CPC.

5. A joint national convention of all the Constituent Organisations of Apex JAC shall be held on 18th July 2014 at New Delhi. Each Constituent shall issue necessary notice for the same. (The last date for submission of memorandum to 7 CPC has been extended upto 31st July 2014 at the instance of Staff Side, JCM).

All the Constituents of the Apex JAC is requested to communicate the above decisions to its field formations and copy of the circular may please be endorsed to Apex JAC HQr.
With warm greetings,
Yours fraternally


Convener
Posted by national federation of civil accounts accociations at 7:06 PM No comments:

the PAO, Central Excise Unit, Guntur held its biennial Unit Conference on 02/04/2014 in terms of the provisions laid down in the Article 11 & 12 (Part-IV) of the Constitution of All India Civil Accounts Employees Association (duly approved by CGA and DOPT) and  elected following officials as office bearers of the Unit who will hold the office of the Unit Association for a period of two years or until the newly elected office bearers take charge on expiry of the term.

Posted by national federation of civil accounts accociations at 6:57 PM No comments:


President of the Meeting
Posted by national federation of civil accounts accociations at 6:53 PM No comments:

A meeting between the Staff Side ( represented by National Executives of All India Civil Accounts Employees Association and All India Civil Accounts Employees Association Category II) and the official side  (represented by the officers of CGA  office) under the Chairperson-ship of CGA was held on 30th May 2013 for discussion of 15 point Charter of Departmental Demands. But even after lapse of more than a year, the official side has not implemented any of the assurances  given by them in the said meeting.
The extended federal executive meeting of NFCAA held in Delhi on 21st & 22nd September 2013, after a review of status of the items discussed in the aforementioned meeting, requested CGA through  a Resolution to convene a meeting with the representatives of the Associations. But, CGA ignored the same. The Federal Executive meeting held in Delhi on 11th & 12th January 2014 once again took the decision of the requesting CGA to convene the meeting. But, CGA did not respond to the said request too.
As such, the extended federal executive meeting held at Nagpur on 5th April 2014 decided that the Central Headquarters of All India Civil Accounts Employees Association shall once again request CGA to convene the meeting at the earliest and in case there is no response, protest action shall be initiated by holding general body meetings in all the units. Accordingly, the Central Headquarters of All India Civil Accounts Employees Association vide its letter No: AICAEA/HQ/A-2/2014/743  dated: 29th May, 2014 had requested CGA to convene the meeting. But, CGA has not responded so far.
In addition to the above situations, various other serious developments have also taken place during the period. Indiscriminate transfer and posting of the persons to different stations in violation of understanding arrived at between the authorities and the Association has created serious problems to the officers and employees of different categories. Within the last seven months i.e. from October 2013, the authorities have not completed the membership re-verification for the purpose of continuance of recognition of the All India Civil Accounts Employees Association and membership verification for recognition of  the All India Civil Accounts Employees Association Category II. CGA is also reluctant to send his recommendations regarding Pay Scales etc. to the 7CPC.
Therefore, as per the  directive of the Extended Federal meeting of Nagpur, it has been decided to observe Demands Day On 19th June 2014 by holding unit wise general body meeting in all Units.
All Branches are  thus hereby directed  to take immediate action . They are requested to entrust the responsibility of organizing the meetings in different units to all Branch Committee, Federal Executive and Women Committee members. Each of them may be assigned specific units (s) with the request to hold meetings, adopt Resolution and ensure dispatch of Resolution to CGA. All Branches are also requested to complete and send the compliance report on observance of the Demands day  to Federation Headquarters on 20th June 2014 positively.

Subject: Request for the formal meeting with the representatives of Association.

I have been directed to draw your kind attention to this Associations letter No: AICAEA/HQ/A-2/2014/573 dated 24th April, 2014 on the above mentioned subject and state that, it is more than eight months the Association has been requesting you to kindly convene a meeting with the National Executive for the review of the status of the items discussed in the meeting held on 30th May 2013 under your Chairpersonship. But, no favorable response has been received by this Association so far.

As the employees have become restive, I have been directed to request you once again to convene the meeting without any further delay so that ongoing congenial atmosphere continue to prevail in the organization.

Thanking you,
Yours Sincerely,


Secretary General
Posted by national federation of civil accounts accociations at 10:46 AM No comments: 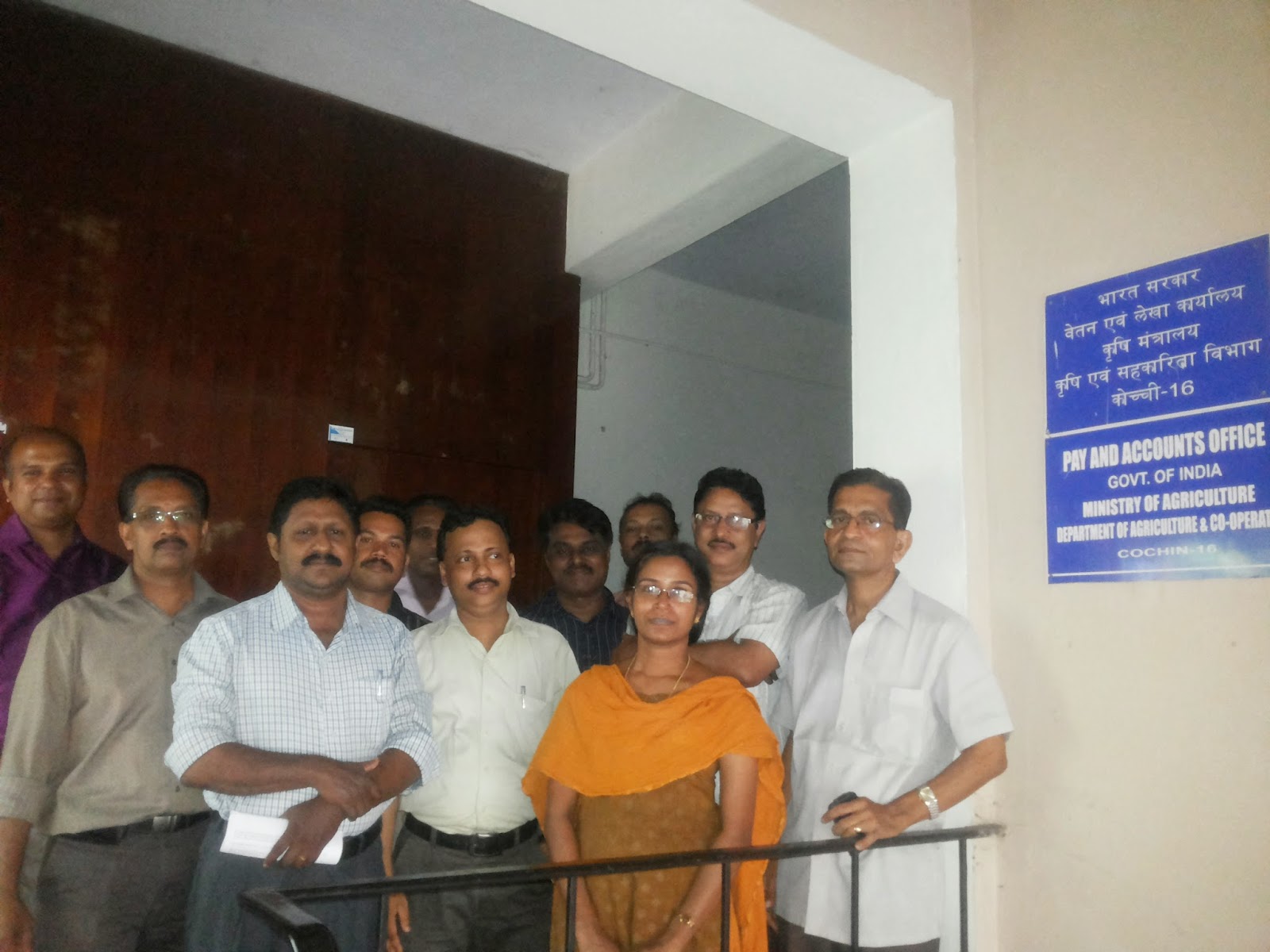 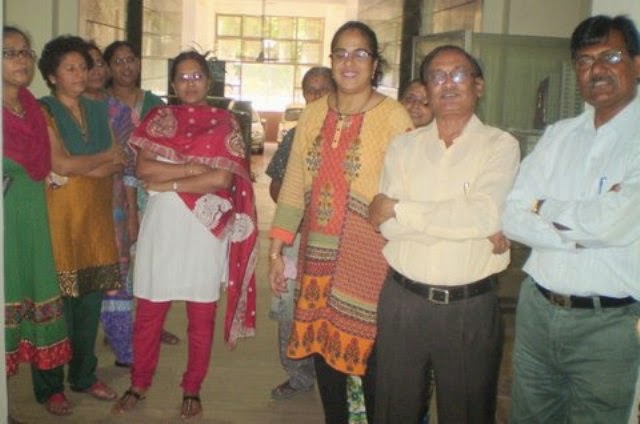 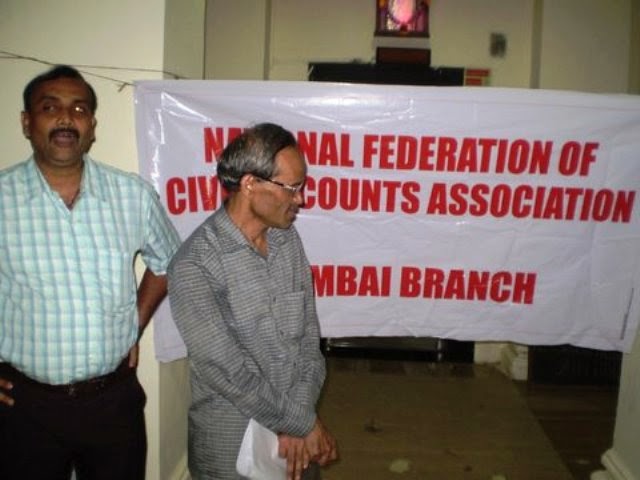 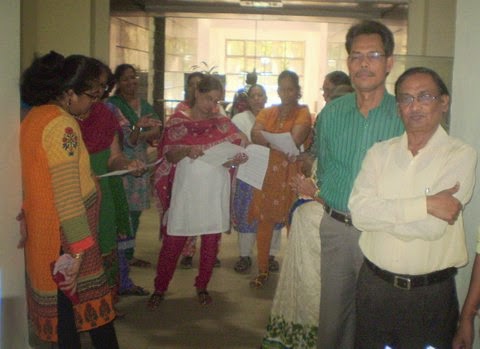 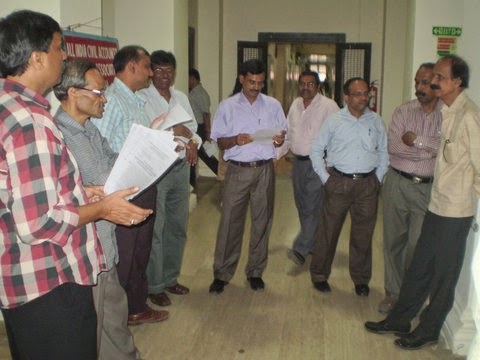 Posted by national federation of civil accounts accociations at 10:36 AM No comments: