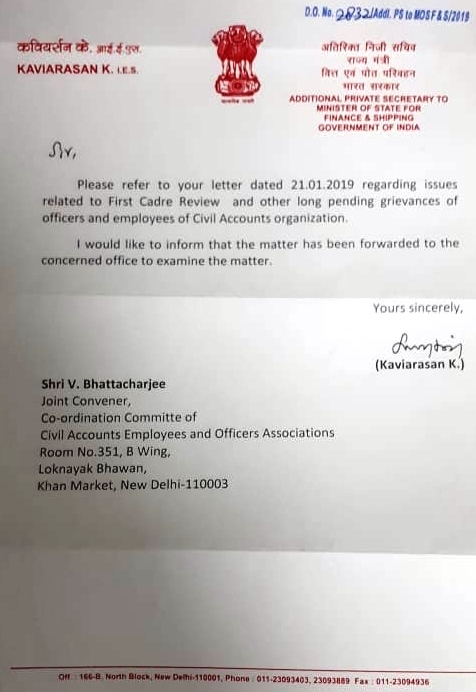 Posted by national federation of civil accounts accociations at 6:38 AM No comments:

Posted by national federation of civil accounts accociations at 6:33 AM No comments:

1.  Seeking immediate intervention of the Government of India against indifferent attitude of CGA towards the causes of employees& officers of the organization.
2.      Poster campaign from 1st March 2019
3.     Two days mass Dharna on 12th &13th March 19 in front of CGA office, New Delhi
·       DECIDED TO RESORT TO LEGAL ACTIONS ON ISSUES OF GRANT OF
1.               Benefit of MACPS to Levels 8 and 9 to Accountants Respectively.
2.               Promotion as AAO under 10%promotion quota from due dates.
·       HAILED THE MEMBERS FOR MAKING THE STRIKE ON 8TH& 9TH JANUARY 2019 A GRAND SUCCESS
The meeting of the Federal Executives of NFCAA was held at Nagpur on 11th February 2019 immediately after the meeting of the Co-ordination Committee of Civil Accounts Employees and Officers Associations was concluded. The meeting was chaired by Com. Amol. V. Sule, President, NFCAA and Secretary General, AICAEA CATII. The meeting endorsed the decisions of the meeting of Co-ordination Committee of Civil Accounts Employees and Officers Associations held on 11th February 2019 and took following decisions:

National Federation of Civil Accounts Associations (NFCAA) shall resort to extensive postering throughout the country demanding intervention of the Government against indifferent and anti-employee attitude of the Controller General of Accounts.
TWO DAYS CONSECUTIVE MAHA DHARNA IN FRONT OF CGA OFFICE, NEW DELHI
FROM 10.30 AM OF 12th TO 4 P.M. OF 13th March 2019
·      The Dharna shall be held in front of the office of Controller General of Accounts, New Delhi under the banner of Co-ordination Committee of Civil Accounts Employees & Officers Associations. It shall commence at 10.30 A.M. of 12th March and continue till 4 P.M. of 13th March 2019.
·     All National Executive members of AICAEA and AICAEA CAT II, Federal Executive Members of National Federation of Civil Accounts Associations, office bearers of state/station/local COCs, Branch Committee members and Unit Committee Members (of All India Civil Accounts Employees Association) shall participate in the Dharna.
·    All participants for Dharna shall ensure their arrival at the Dharna spot before the commencement for the Dharna.
·  Station/State wise participants from different affiliates shall be as under-

STRUGGLE FUND
Since large number of members shall come to Delhi from different Branches and Units to take part in the two days Dharna on 12th &13th March 2019, huge amount of additional financial burden shall be there on the Organisations. The meeting has therefore, decided that a struggle fund shall be generated to mitigate the additional financial burden. All members shall be appealed to contribute a minimum of Rs. 100/- (one hundred only) to the Struggle fund. This fund shall be retained by the Branches and they shall use the accumulated amount for the to and fro journey of the participants for Dharna. Delhi Branches shall use the fund for arranging buses/ transportation of the members from different parts of the city to CGA office. The Central Headquarters of AICAEA and AICAEACATII shall make arrangements for boarding and lodging of the participants for Dharna in Delhi.

LEGAL ACTIONS ON THE ISSUES OF GRANT OF

Benefit of MACPS to Levels 8 and 9 to Accountants Respectively.Promotion of Senior Accountants as AAO under 10%promotion quota from due dates.

In the informal discussion with the Internal Cadre Review Committee of CGA Office on 8th February 2019, the official side had raised some doubts in the justifications in the matter of upgradation of LDCs as Accounts Assistants (to the level of UDCs) and merger of DEOs with the cadre of Sr. Accountants. Further, the official side had suggested that, since there would be big gap between pay scales of Accounts Assistants (level 4) and the Senior Accountants (level 7), the posts of Accountants may be continued.
The Federal Executive meeting, after due consideration has decided on these matter that,
1.      In order to justify  (a) the upgradation of LDCs as Accounts Assistants and (b) the merger of DEOs with the cadre of Sr. Accountants, the individuals and Branches shall send the copies of the orders of the local authorities on allocation of duties to the members of these two cadres
and
2. Regarding continuation of 20% posts of Accountants even after the Cadre Review, Branches shall give their opinion to the Central Headquarters of AICAEA (email: aicaeachq@gmail.com) before 18th February 2019 so that it could prepare a note on the point no:- 1 and 2 forward it to the Internal Cadre Review Committee.

Ten major Trade Unions of the country except BMS had called upon the working class of the country to resort to two days strike on 8th and 9th January 2019 against the anti-employee and anti-working class   policies of the Government and in support of their Demands.
The Confederation of Central Government Employees & Workers' which represents 120 Central Government Employees organizations including the AICAEA and AICAEA CATII had endorsed the call of strike and called upon the Central Government Employees of the country to resort to strike in support of the ten common demands of Central Government Employees and their respective depart-mental demands.
The Central Government Gazetted officers Associations (CCGGOO) representing  all major Central Government  departments including Civil Accounts extended support to the Strike and directed its state level Committees to organize MASS DHARNA ON 8TH AND 9TH JANUARY 2019.
The Federal Council meeting of the National Federation of Civil Accounts Associations held at Bengaluru on 6th & 7th December, 2018 had endorsed the call of two days strike on 8th and 9th January 2019.
AICAEA and AICAEA CATII had served the strike notice to CGA on 12.12.2018 which was the sixth anniversary of first ever strike of the Confederation demanding appointment of 7 Pay Commission. The Charter of Demands was submitted along with the strike notice in two parts -PART-A: Ten common demands of CG Employees including to demand of “Scrap NPS and Restore OPS” and Part-B: Ten major demands of Civil Accounts Employees including prominent demand of “Immediate Cadre Review”.
In spite of threatening  by  the Controller General of Accounts vide OM dated 20.12.2018, the members observed “STRIKE PLEDGE DAY on 27.12.2018” and served notice to all local heads of the Departments and offices informing that that they shall be on strike on  8th and 9th January 2019.
Thousands of Civil Accounts employees from all those places/stations/states where major concentration of Civil Accounts Employees are there have participated in the strike. There are many offices, where only one employee is working and such single person had also participated in the strike. Members from North Eastern States, West Bengal, Andhra Pradesh & Telangana, Tamilnadu & Pondicherry, Karnataka, Kerala, Maharashtra, Rajasthan, Gujarat, Delhi, Bihar, Uttar Pradesh and Madhya Pradesh took part in the strike. Strike was total in Mumbai, Andhra Pradesh &Telangana, West Bengal and almost total in Assam and Tamilnadu etc. In other places, percentages varied from 50 to 70 percent.
The strike performance was therefore a grand success in the Civil Accounts Organization.
According to the media reports nearly 20 crores workers took part in the strike on 8th and 9th January 2019.
The Federal Executive meeting congratulated the rank and file of membership and offered red salute to them for making the strike a grand success in the Civil Accounts organisation and becoming the part of 20 CRORES STRUGGLING WORKERS OF THE COUNTRY.
(V. Bhattacharjee)
Secretary General

Posted by national federation of civil accounts accociations at 10:19 AM No comments: